Starting in August 2020 and continuing through to 2025 (the International year of Quantum Science and Technology), Boyle, PLLC will feature a scientist or event notable in the history of the development of quantum mechanics.  For the month of January 2021, Boyle PLLC is pleased to highlight the life of  Arthur H. Compton.
Previous and subsequent features can be found here . 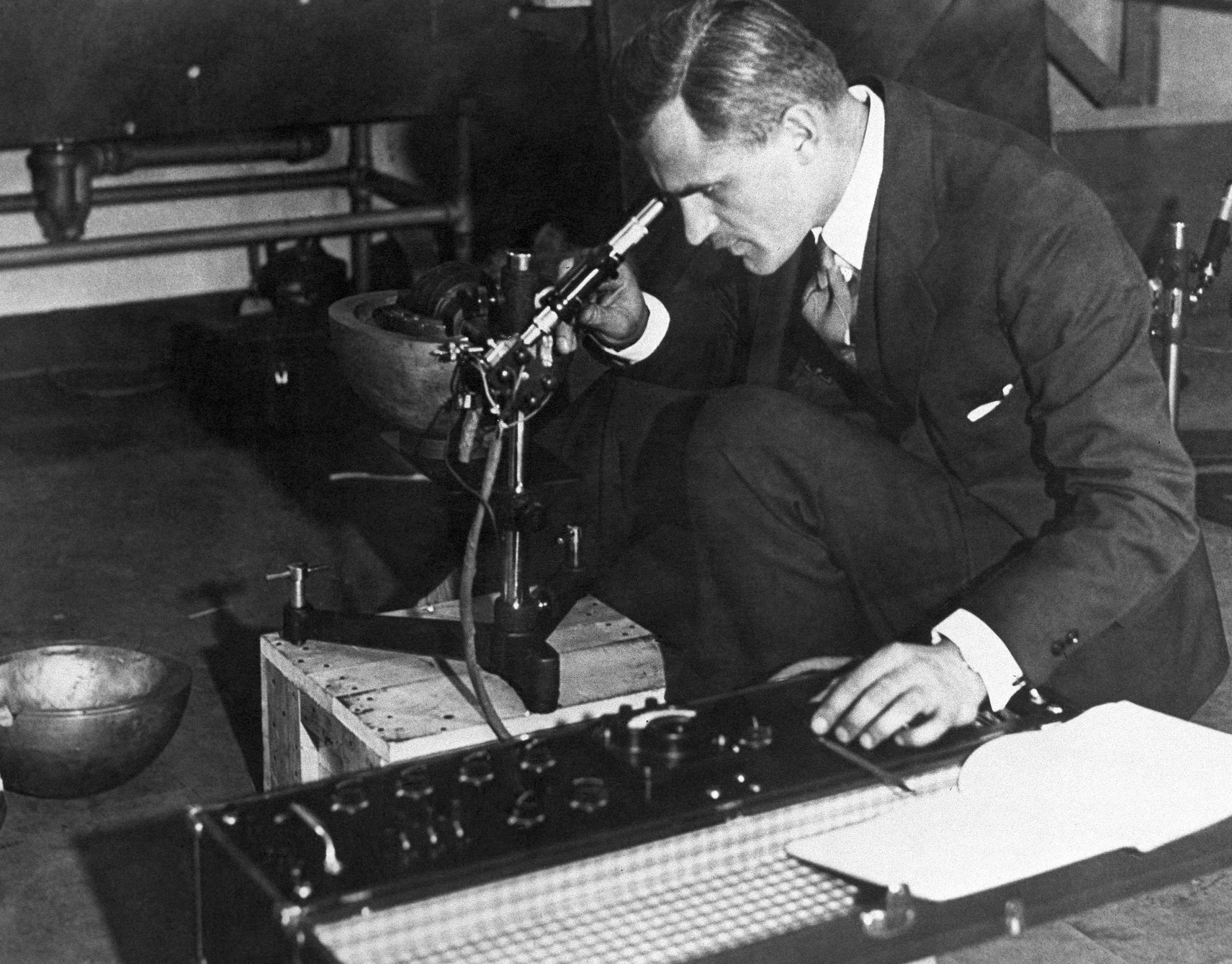 Arthur H. Compton in March 1932, at the University of Chicago, shown with a cosmic ray "trap" he designed.  At the time of the photograph, Compton was preparing to visit mountain peaks  in order to measure interstellar-based cosmic rays.  Photograph: Associated Press.

Arthur Holly Compton was born September 10, 1892 in Wooster, Ohio to Elias and Otelia Compton—a family that emphasized education, discipline, and religious training.  Elias was a Presbyterian minister and professor of philosophy at Wooster College and Otelia was a graduate of the Western Female Seminary in Oxford, Ohio.  Compton received his B.S. degree from Wooster College in 1913, and from there enrolled at Princeton for graduate study in physics.  He completed his Ph.D. in 1916, and pursued post-graduate research in x-rays, successively, at University of Minnesota in Minneapolis (1916), at Westinghouse Lamp Company in Pittsburgh (1917-1919), at Cavendish Laboratory in Cambridge, England as a National Research Council Fellow (1919-1920), and at Washington University in St. Louis as Wayman Crow Professor and Chairman of the Department of Physics (1920-23).  By the fall of 1922, this multi-year experimental and theoretical research program resulted in Compton's most famous discovery: an understanding how high-energy radiation (such as x-rays) scatters from matter—a scattering phenomenon known today simply as "the Compton effect."

X-rays were discovered in 1895 by Wilhelm Röntgen.  In 1916, the conventional manner of analyzing the interaction between x-rays and charged particles, such as electrons, relied upon the understanding that x-rays are a form of high-energy electromagnetic radiation.  However, Compton found  that the conventional treatment of the interaction between x-rays and electrons, using classical electromagnetic theory, did not agree with experimental results.  In order to account the experimental results, Compton modeled the incident x-ray as a "hard" particle with momentum and energy based upon Einstein's light-quanta hypothesis of 1905.  Pursuant to Compton's model, an incident x-ray interacting with a target electron is treated like an incident billiard ball (the x-ray photon) striking a second billiard ball at rest (the electron).  Conservation of energy and momentum then dictates the amount of momentum transferred from the incident x-ray to the target electron, the resulting momentum, and the scattering angle between the scattered x-ray and electron.  Accordingly, the relationship between the momentum p of the x-ray and the wavenumber  k  of the x-ray (i.e.,  p = ħk where ħ is Planck's constant h divided by 2π) means that Compton's model can compute the scattering angle and wavenumber k of an x-ray scattering off a target electron.  Compton was awarded the Nobel prize in physics in 1927 for the discovery of this effect, sharing the prize with C.T.R. Wilson—the inventor of the cloud chamber.

After serving as Chairman of the Department of Physics at Washington University in St. Louis, in 1923, Compton became a professor of physics at the University of Chicago.  In 1931, Compton embarked on a study of cosmic rays, showing, by 1934, that cosmic rays are not a form of electromagnetic radiation, but are charged particles.  Moreover, during World War II, as part of the Manhattan Project, Compton brought Enrico Fermi to the University of Chicago, which  is where, on December 2, 1942, Fermi oversaw the construction of the first atomic pile to achieve criticality.