Starting in August 2020 and continuing through to 2025 (the International year of Quantum Science and Technology), Boyle, PLLC will feature a scientist or event notable in the history of the development of quantum mechanics.  For the month of December 2020, Boyle PLLC is pleased to highlight the life of  Ernest Rutherford.
Previous and subsequent features can be found here . 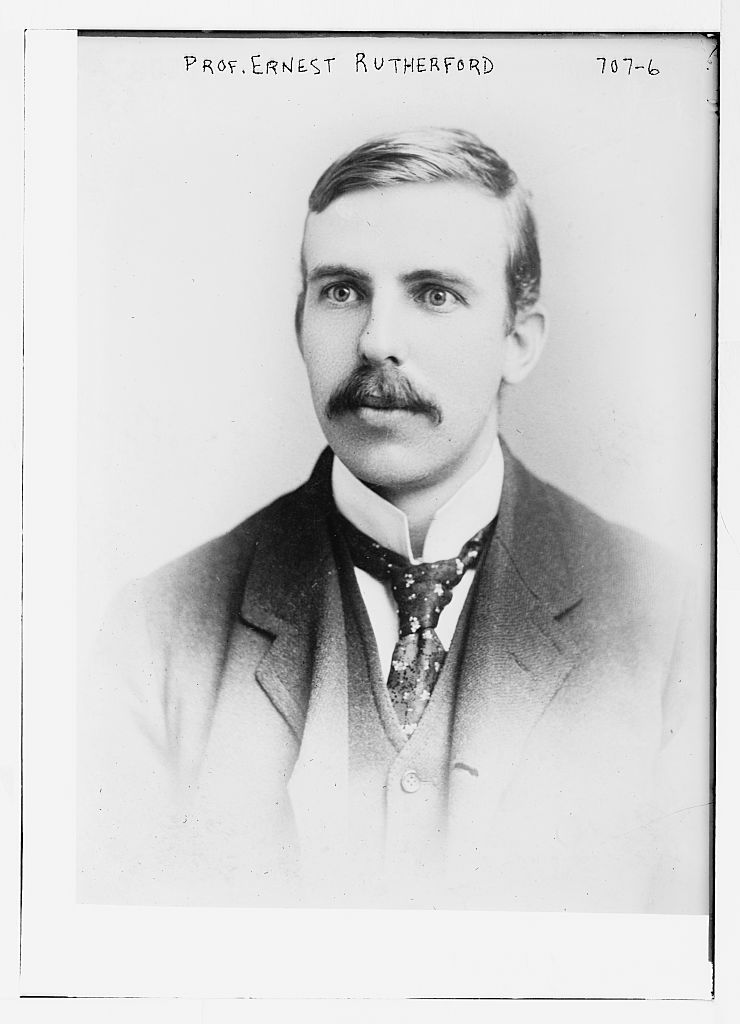 Ernest Rutherford in 1908, the year he was awarded the Nobel Prize in Chemistry "for his investigations into the disintegration of the elements, and the chemistry of radioactive substances."   Photograph: George Grantham Bain Collection (Library of Congress).

Ernest Rutherford was born August 30, 1871 at Brightwater near Nelson, New Zealand, to James Rutherford, a small-scale farmer, and Martha Thompson, a teacher prior to her marriage.  Rutherford's parents were born in the British Isles, but journeyed to New Zealand in the nineteenth century looking for economic opportunity.   Through scholarships and awards, Rutherford was able to enroll in Canterbury College in Christchurch, from which he received a B.A. degree in 1892, an M.A. in 1893, and a B.Sc. degree in 1894.  A further scholarship in 1895 allowed Rutherford in study at the Cavendish Laboratory at Cambridge University in England as a research student, then under the direction of J.J. Thomson.  Thomson, impressed with the work of his new research student, invited Rutherford to work with him on the investigations of x-rays—then, only recently discovered—and Thomson and Rutherford examined the use of x-rays on electrical discharge in gases. This work ultimately led, in 1897, to Thomson's discovery of the electron.

After his work at Cambridge, Rutherford accepted a full professorship in 1898 from McGill University, in Montreal.  There, Rutherford continued research he began at Cambridge regarding the properties of radioactive bodies and the emission of alpha rays (alpha particles are now known to be two protons and two neutrons bound together under nuclear forces).  With R.B. Owens, Rutherford discovered a new noble gas—an isotope of radon, known, alternately, as thoron—produced from the radioactive decay of thorium-232.  After Frederick Soddy arrived to McGill in 1900,  from Oxford, Rutherford and Soddy collaborated to create a “disintegration theory” of radioactivity.  Under this view, radioactive processes were fundamentally driven by nuclear processes, and were not molecular processes.  For this work, Rutherford was awarded the 1908 Nobel Prize in Chemistry.

Meanwhile, in 1907, Rutherford become Langworthy Professor of Physics in the University of Manchester, in England.  In 1909, one year after the award of his Nobel Prize, Rutherford gave to undergraduate, Ernest Marsden, the assignment of firing alpha particles at a gold foil target and measuring deflection.  While most of the alpha particles scattered through the target foil with very little deviation, some were deflected at very large angles, including angles larger than 90°.  The results were surprising and garnered the famous reaction from Rutherford:  "It was almost as incredible as if you fired a fifteen-inch shell at a piece of tissue paper and it came back and hit you."  In 1911, in order to account for these experimental results, Rutherford proposed a novel view of the atom that is confirmed today and can now be seen to have provided a framework for the development of quantum theory:  most of the atom is empty space, occupied by negatively-charged electrons, with almost all of the mass of the atom concentrated in a space about 1/10,000 the size of the atom, occupied by the positively charged nucleus.  Niels Bohr—who joined Rutherford at Manchester in 1912—used Rutherford's model and quantum considerations to account for chemical and spectroscopic features of early atomic measurements.

In 1919, Rutherford became the director of the Cavendish Laboratory at Cambridge, succeeding J.J. Thomson.  At Cavendish, Rutherford oversaw the work of future Nobel Laureates, such as James Chadwick, credited with discovering the neutron.  Indeed, Chadwick had been a student of Rutherford's at Manchester and joined Rutherford at Cavendish.

Rutherford died in Cambridge on October 19, 1937. His ashes were buried in the nave of Westminster Abbey, west of Sir Isaac Newton’s tomb and near the tomb Lord Kelvin.